The Story of a Macaron-Loving Girl Who Lived a Thousand Years Somehow. (Light Novel) 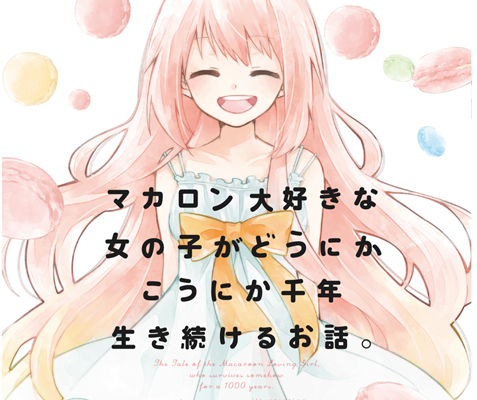 Paraporopurun Peroporoparapon, She Can Talk To Concrete, The Lying Cicada and the Blue Sky, マカロン大好きな女の子がどうにかこうにか千年生き続けるお話。

The Story of a Macaron-Loving Girl Who Lived a Thousand Years Somehow. is a compilation of four stories.

The Story of a Macaron-Loving Girl Who Lived a Thousand Years Somehow.
A whimsical girl who loves macarons learns her best friend has ended up a thousand years in the future, so she lives a thousand years to meet her and watches the world change around her. (A rewrite of the original with more detail and extra scenes.)

She Can Talk To Concrete
A boy with a terminal illness doesn’t tell his mother about it, and instead enjoys having no responsibilities. Then he meets a girl from middle school who’s changed considerably since then, and shares with her the mysteries of cardboard and building secret bases. (Also, there’s a scene I simultaneously can and can’t frickin’ believe got an illustration.)

Paraporopurun Peroporoparapon
An alien finds he’s in love with another alien, but knows that, her being royalty, he can never hope to compete with her thirty-five trillion fiancés… or can he? Said aliens have bizarre names, bizarre bodies, and bizarre practices, but are actually really cute.

The Lying Cicada and the Blue Sky
A boy is visited one night by an unusual girl initially claiming to be a cicada. Eventually, she reveals her intention to “repay the favor” of him once saving her life.